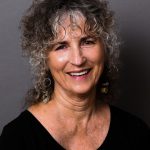 Lily Iona MacKenzie sprouted on the Canadian prairies under cumulous clouds that bloomed everywhere in Alberta’s big sky. They were her first creative writing instructors, scudding across the heavenly blue, constantly changing shape: one minute an elephant, bruised and brooding. The next morphing into a rabbit or a castle. These billowing masses gave her a unique view of life on earth.

As a girl, she prowled the land, talking to chickens and pigs and lambs, creating scenarios for them. She also tried to make perfume from the wild Alberta roses and captured caterpillars, watching with wonder when they transformed themselves into butterflies. Everything around her seemed infused by nature spirits waiting to be released.

She realized that all objects are in motion, waiting for stories to illuminate them. The clouds’ shifting form also schooled her in the various possibilities open to her as a writer. So did Jack Frost’s enchanted creations that enlivened the windows in wintertime, forcing her to view her surroundings as if through a bewitching prism. These early experiences helped her to envision multi-dimensional characters. Magical realism pulses at the heart of her narratives, her work celebrating the imagination.

As an adult, Lily continues to seek instruction about fiction from clouds. Just as they provide the earth with much-needed water, she believes that stories have a similar function, preparing the mind to receive new ideas. Also, conditions inside a cloud are not static—water droplets are constantly forming and re-evaporating. Stories, too, change, depending on who is reading them, each one giving life to its readers.

A Canadian by birth, a high school dropout, and a mother at 17, in her early years, Lily supported herself as a stock girl in the Hudson’s Bay Company, as a long distance operator for the former Alberta Government Telephones, and as a secretary (Bechtel Corp sponsored her segue into the States). She also was a cocktail waitress at the Fairmont Hotel in San Francisco, briefly broke into the male-dominated world of the docks as a longshoreman (she was the first woman to work on the SF docks and almost got her legs broken), founded and managed a homeless shelter in Marin County, and eventually earned two Master’s degrees (one in Creative writing and one in the Humanities). She has published reviews, interviews, short fiction, poetry, travel pieces, essays, and memoir in over 150 American and Canadian venues. Her novel Fling! was published in July 2015 by Pen-L Publishing. Her upcoming novel, Freefall: A Divine Comedy will be released in 2018. Her poetry collection All This was published in 2011. She also has taught writing at the University of San Francisco for 30 years and was vice-president of USF’s part-time faculty union. When she’s not writing, she paints and travels widely with her husband.
Regal House Publishing is delighted to announce the release of Lily’s novel Curva Peligrosa in the summer of 2017.

Lily’s poem ‘God Particles’ will be featured in Pact Press’ inaugural anthology to be released in May of 2017.