You are here: Home / Daniel A. Olivas 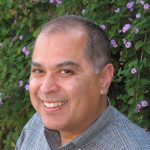 Olivas earned his degree in English literature from Stanford University, and law degree from the University of California, Los Angeles. Since 1990, he has served as an attorney in the California Department of Justice’s Public Rights Division. Olivas and his wife make their home in Los Angeles and are the parents of an adult son.

Pact Press is very proud to be publishing Daniel Olivas’ poetry collection Crossing the Border in 2017.